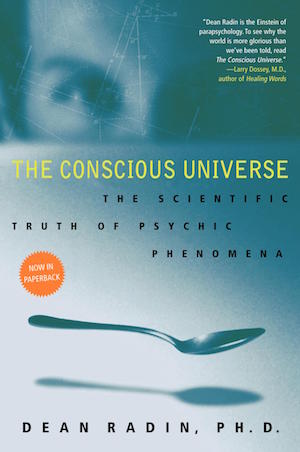 In this well-written book, Dean Radin meticulously defines the scientific terms he is using for describing psychic phenomena. The following definitions are to be found on pages 14 and 15 of the book.

Information exchanged between two or more minds, without the use of the ordinary senses.

Information received from a distance, beyond the reach of the ordinary senses. A French term meaning ‘clear-seeing’. Also called ‘remote-viewing’.

Mental interaction with animate or inanimate matter. Experiments suggest that it is more accurate to think of psychokinesis as information flowing from mind to matter, rather than as the application of mental forces or powers. Also called ‘mind-matter interaction,’ ‘PK,’ and sometimes ‘telekinesis.’

Information perceived about future events, where the information could not be inferred by ordinary means. Variations include ‘premonition’, a foreboding of an unfavorable future event, and ‘presentment’, a sensing of a future emotion.

Extrasensory perception, a term popularized by J. B. Rhine in the 1930s. It refers to information perceived by telepathy, clairvoyance, or precognition.

A letter of the Greek alphabet (Ψ) used as a neutral term for all ESP-type and psychokinetic phenomena.

Out-of-body experience; an experience of feeling separated from the body. Usually accompanied by visual perceptions reminiscent of clairvoyance.

Near-death experience; an experience sometimes reported by those who are revived from nearly dying. Often refers to a core experience that includes feelings of peace, OBE, seeing lights, and certain other phenomena. Related to psi primarily through the OBE experience.

The concept of dying and being reborn into a new life. The strongest evidence for this ancient idea comes from children, some of whom recollect verifiable details of previous lives. Related to psi by similarities to clairvoyance and telepathy.

Recurrent phenomena reported to occur in particular locations, including sightings of apparitions, strange sounds, movement of objects, and other anomalous physical and perceptual effects. Related to psi by similarities to psychokinesis and clairvoyance.

Large-scale psychokinetic phenomena previously attributed to spirits but now associated with a living person, frequently an adolescent. From the German for ‘noisy spirit.’

Before going into the detailed discussion of this book, allow me a personal remark. I would like to express my deep admiration for the incredible and really tough work the author has done to realize his vision, and get parapsychology aligned with all the other sciences, as a not less exact, not less serious, and not less important science than physics, mathematics, biology and all the rest. And while this book reads very cool, as it’s written with an intention focused on facts that are experimentally verified and that are coherently aligned into one or several theories, it can be verified or falsified, according to strict scientific logic and practice.

Now, reading the Postscript of the book, the reader may get an idea what the author actually went through, as a human being, as a non-conforming and novelty-oriented scientist, one of those we call the leading edge in modern science. When a research project is finalized, people always sit back and look at the immense work, lauding the experimenter. But have they ever felt how it was to go through all that, from the first to the last moment?

For example, on Monday, I’m accused of blasphemy by fundamentalists, who imagine that psi threatens their faith in revealed religious doctrine. On Tuesday, I’m accused of religious cultism by militant atheists, who imagine that psi threatens their faith in revealed scientific wisdom. On Wednesday, I am stalked by paranoid schizophrenics who insist that I get the FBI to stop controlling their thoughts. On Thursday, I submit research grants that are rejected because the referees are unaware that there is any legitimate evidence for psi. On Friday, I / get a huge pile of correspondence from students requesting copies of everything I’ve ever written. On Saturday, I take calls from scientists who want to collaborate on research as long as I can guarantee that no one will discover their secret interest. On Sunday, I rest, and try to think of ways to get the paranoid schizophrenics to start stalking the fundamentalists instead of me./299-300

To begin with, I would like to stress the energy nature of those various phenomena that we use to call psychic or paranormal. When I speak of bioenergy here I mean the bioplasmatic energy that is also called cosmic energy field, not body electrics or electromagnetism. This is also the energy that is meant and referred to in shamanism, when shamans talk about the spirits of nature. These spirits, to be true, are energy streams that carry transcoded information, and as such they are part of the huge communication network built into living systems. The author says that psi research does not fit in conventional theories and that it’s not correct that researchers, because they face a novelty that scares them, explain what is so far unexplainable, with the theory of electromagnetism.

The results show that when telepathic receivers are isolated by heavy-duty electromagnetic and magnetic shielding (specially constructed for rooms with steel and copper walls), or by extreme distance, they are still able to obtain information from a sender without using the ordinary senses. So we know that telepathy doesn’t work like conventional electromagnetic signaling. And yet, because the metaphor provides a powerful way of thinking about telepathy, many people still imagine that telepathy ‘works’ through some form of mental radio./16

The link to psi is that biological systems are exquisitely sensitive to certain kinds of information. Perhaps biological systems can both send and access teleported information, in which case we would suddenly have a scientifically acceptable (but still fundamentally mysterious) way to both perceive and influence objects at a distance./286

In order to keep this review in reasonable boundaries, I will discuss in more detail here only Chapter 7, entitled Perception Through Time, which is an intriguing research topic that was covered also very well in Michael Talbot’s study The Holographic Universe. The author explains that the accumulation of conceptual frameworks for explaining how perception and time hang together does not help much. Concepts like retrocognition, real-time clairvoyance or precognition, the author says, rather blur the usual concepts of perception and time. In fact, it is true that they explain nothing.

In my view all depends on how we define time, and without doing this, and considering what relativity theory said about it, on one hand, and what quantum physics says, on the other, we cannot make any valid assumptions about precognition, prophecy or past-cognition.

The author does not advance any theory, as for example Michael Talbot does by explaining all these phenomena with the holographic nature of the universe. When all is one single hologram, it’s very well conceivable that the timeline of events is a mere projection system that actually is a crutch for our imagination, while in reality there is no such timeline at all in life, as all events occur simultaneously.

But while this concept is very elegant, Radin did not venture into any of those larger frameworks, and this is again strategically a smart way of doing. For it’s easier to bring a theory through that is based on hard facts and verifiable evidence, and later expand the theoretical framework.

Buy this Book from Amazon

3 thoughts on “The Conscious Universe”