The Law of Attraction in the Thought World, by William Walker Atkinson, New York: Seed of Life Publishing, 2008. Originally published in 1908. 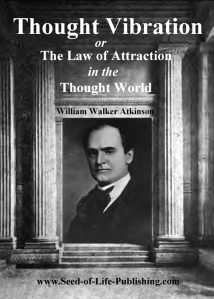 I BELIEVE that the mind of man contains the greatest of all forces—that thought is one of the greatest manifestations of energy.

I BELIEVE that the man who understands the use of thought-force can make of himself practically what he will.

I BELIEVE that, not only is one’s body subject to the control of the mind, but that, also, one may change environment, ‘luck’ and circumstances by positive thought taking the place of negative. I know that the ‘I Can and I Will’ attitude will carry oe forward to success that will seem miraculous to the man on the ‘I Can’t plane.

I BELIEVE that ‘thoughts are things’ and that the Law of Attraction in the thought world will draw to one just what he desires—or fears.

I BELIEVE in the tspel of work—in ‘hustling.’

I BELIEVE in the I DO, as well as the I AM. I know that the man who will take advantage of the power of the mind, and who will manifest that power in action, will go forward to success as surely and as steadily as the arrow from the bow of the skilled archer.

I BELIEVE in the Brotherhood of Man.

I BELIEVE in being kind.

I BELIEVE in everyone minding his own business—and allowing everyone else the same privilege.

I BELIEVE that he who hates is an assassin; that he who covets is a thief; that he who lusts is an adulterer; that the gist of a crime is in its desire. Seeing this—looking into our own hearts—how can we condemn?

I BELIEVE that evil is but ignorance.

I BELIEVE that ‘to know all is to forgive all.’

I BELIEVE that there is good in every man—let us help him to manifest it.

I BELIEVE in the absolute equality of the man and the woman—sometimes I think that the odds are slightly in favor of the woman.

I BELIEVE in the sacredness of sex—but I also believe that sex manifests on the spiritual and mental planes, as well as on the physical. And I believe that, to teh pure, all things are pure.

I BELIEVE that man is immortal—that the Real Self is spirit, which uses mind and body as its tools and manifests itself according to teh fitness of the tools.

I BELIEVE that man is rapidly growing into a new plane of consciousness, in which he will know himself as he is—will recognize the I AM—the Something Within.

I BELIEVE that there is an Infinite Power in, and of, all things.

I BELIEVE that, although today we have but the faintest idea of that power, still we will steadily grow to comprehend it more fully—will get in closer touch with it. Even now we have momentary glimpses of its existence—a momentary consciousness of oneness with the Absolute

I BELIEVE that the greatest happiness consists in maintaining toward the Absolute the attitude of the trusting child, who, feeling no doubt of the parent’s love—no doubt of his wisdom—places his little hand in that of the parent and says, ‘Lead Thou me on.’

I BELIEVE that he who feels towards the Absolute the trustfulness of the babe, which places its little tired head close tot he breast of the mother, will also be conscious of the tender, answering pressure, as the babe is drawn just a little closer to teh mother-heart.

—The Universe is governed by Law—one great Law. Its manifestations are multiform, but viewed from the Ultimate, there is but one Law. We are familiar with some of its manifestations, but are almost totally ignorant of certain others. Still, we are learning a little more every day—the veil is being gradually lifted. /1

—When we come to see that thought is a force—a manifestation of energy—having a magnet-like power of attraction, we will begin to understand the why and wherefore of many things that have heretofore seemed dark to us. There is no study that will so well repay the student for his time and trouble as the study of the working of this mighty law of the world of thought—the Law of Attraction. /1

—When we think, we send out vibrations of a fine ethereal substance, which are as real as the vibrations manifesting light, heat, electricity, magnetism. That these vibrations are not evident to our five senses is no proof that they do not exist. A powerful magnet will send out vibrations and exert a force sufficient to attract to itself a piece of steel weighing a hundred pounds, but we can neither see, taste, smell or hear nor feel the mighty forces. /2

—Telepathy and its kindred phenomena are not idle dreams. Light and heat are manifested by vibrations of a far lower intensity than those of thought, but the difference is solely in the rate of vibration. /2

—We are largely what we have thought ourselves into being, the balance being represented by the character of the suggestions and thoughts of others, which have reached us either directly by verbal suggestions or telepathically by means of such thought-waves. Our general mental attitude, however, determs the character of the thought-waves received from others, as well as the thoughts emanating from ourselves. We receive only such thoughts as are in harmony with the general mental attitude held by ourselves; the thoughts not in harmony affect us very little, as they awaken no response in us. /7

—The man who believes thoroughly in himself and maintains a positive strong mental attitude of confidence and determination is not likely to be affected by the adverse and negative thoughts of discouragement and failure emanating from the minds of other persons, in whom these last qualities predominate. /7

—The man who allows his mind to dwell constantly upon thoughts of failure brings himself into close touch with the minds of other ‘failure’ people, and each will tend to pull the other down, still more. The man who thinks that all is evil is apt to see much evil and will be brought into contact with others, who will seem to prove this theory. And the man who looks for good in everything and everybody will be likely to attract to himself the things and people corresponding to his thought. (…) We receive only that which corresponds to our mental attunement. 8

—There are more people on the negative plane of thought than on the positive plane, and consequently, there are more negative thought vibrations in operation in our mental atmosphere. But, happily for us, this is counterbalanced by the fact that a positive thought is infinitely more powerful than a negative one—and if, by force of will, we raise ourselves to a higher mental key, we can shut out the depressing thoughts and may take up the vibrations corresponding with our changed mental attitude. /10

—I am asserting the mastery of my real self. Repeat these words earnestly and positively during the day, at least once an hour, and particularly when you are confronted with conditions which tempt you to act on the lines of the lesser self, instead of following the course dictated by the real self. In the moment of doubt and hesitation, say these words earnestly, and your way will be made clear to you. Repeat them several times after you retire and settle yourself to sleep. But be sure to back up the words with the thought inspiring them, and do not merely repeat them parrot-like. From the mental image of the real self, asserting its mastery over the lower planes of your mind—see the king on his throne. /21

—Strong expectancy is a powerful magnet. He of the strong, confident desire attracts to him the things best calculated to aid him—persons, things, circumstances, surroundings—if he desires them hopefully, trustfully, confidently, calmly. And, equally true, he who fears a thing generally manages to start into operation forces which will cause the thing feared to come upon him. /28

—The key to the mystery is concentration. A little practice will develop within every man the power to use the mental machine properly. When you have some mental work to do, concentrate upon it to the exclusion of everything else, and you will find that the mind will get right down to business—to the work at hand—and matters will be cleared up, in no time. There is an absence of friction, and all waste-motion or lost power is obviated. Every pound of energy is put to use, and every revolution of the mental driving-wheel counts for something. /39